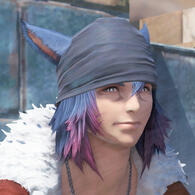 Race: Miqo'te/ Seeker of the Sun

Place of work: The Iron Lynx


Personality: Cheerful, carefree and calm, helpful to a fault and always up for a scrap, sees himself as a good listener although he's sometimes lost on advice at times, although with these traits he does at times like to sit in the background with some peace and quite and enjoys a calm silent atomsphere. very musically inclined finding it quite easy to pick up and play a variety of instruments.


Appearance: On the tall side for a Miqo'te Male, he has tanned skin and traditional Miqo'te markings along with two purple strikes tattos on each cheek. He has light silvery-blue eyes and Light blonde hair (that has been dyed blue and purple), the same is for his Lion shaped tail. He additionally has a small scar on his jaw near his chin as well as a much larger scar running along his right ribs (see pictures for reference).


Guardian(s): J'tohjo follows the ideals and beliefs of both his homelands Guardian - Rhalgr and Oschon, feeling that both of them speak to his soul.

Short Bio: Born and raised in Ala Ghiri, he was only a young toddler when the Subjurgation happened, spent his teenage years doing whatever he could get away with without getting caught by Imperials whilst sneaking out into the bad lands with his Siblings to explore, climb and hunt.

During his early teens up until the point he join the Resistance as a fighter, he would help out Acwulf Fury (a local Resistance fighter and his mentor) as a runner for messages between Resistance cells, a very dangerous job but one an Agile climber and runner like J'tohjo could achieve, it was around this time he picked up the nicname 'Jojo' from the old Highlander who just found it easy and well, it stuck.

Once the resistance started to really gain traction after the battle of Rhalgr's reach, J'tohjo along with one of his younger sisters (from the same mother) signed up along with many likeminded patriots in a heartbeat as fighters, though this was much to the displeasure of their Nunh. As they were leaving J'tohjo was handed an old Gunblade by his mother, the weapon being in her possession for some time before he was born, as she handed it to him she told him of how it belonged to a Vagrant man who saved herself and several others from a terrible beast, who sadly died in the process and since that day she has hidden it away until she felt like one of her child would need it.

He fought along his sister J'espa and their squad (Acwulf 'Sarge' Fury, Karolina Burne and Quirky Sunflower) in several skirmishes around the Peaks and Lochs and was part of the larger army that fought to retake the city of Ala Mhigo. Although out of the group he sadly was the only one to leave alive after a fierce battle against a Magitek Reaper, a scar across his ribs as a constant reminder of that day, left my shrapnal from the reaper exploding.

Once the Alliances armies showed up and he had recovered from his injuries, he choose to not join the army itself in it's push against the Garleans and instead explore the lands to the West now that they were reopened.